Although a skeptic of the paranormal, I acknowledge the existence of what is commonly referred to as "psychokinesis" or "PK," in the context of it being a complicated, transitional evolutionary ability in some humans. My position is based on what I have personally witnessed in other experiments. But what is described herein is simply a photographic effect which, though sure to induce amazement in uninformed observers, should not be accepted as evidence of anything paranormal. [More on PK at the end of this discussion.]

Late one night while doing ongoing research on psychokinetic detection and application methods, I made an interesting discovery involving Polaroid instant photography: the ability to produce eerie, brightly colored images which I call low-light instant photograms. At least this was a personal discovery -- I don't know if others have already described this technique (Polaroid film that doesn't require peel-apart sections is a relatively young invention, introduced 20 years ago with the SX-70 camera), but I could find no mention of using instant photography in this manner in any book.

Follow these do-it-yourself instructions to produce your own "psychic" illusions: 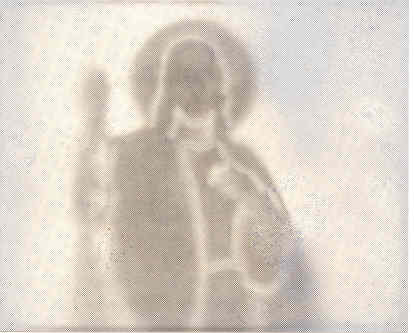 With very little effort, anyone can produce a brightly colored photograph taken in a darkened room, to rival any claimed "psychic" photo. No radiation from the human body, normal or paranormal, is involved -- the mechanics of the process occur in the film itself. Polaroid Spectra HD film, as well as 600 HD, contains 23 microthin emulsion layers (the old type had 19). More than 5,000 chemical reactions take place during developing. The sample photographs that I have provided to TBS (including the one of Jesus seen here) were produced specifically to show how a religious leader might be able to use this technique to mislead his or her followers, to achieve a cult status as well as financial gain.

With regard to my previously mentioned research on PK, I've come to the conclusion that the announcement of positive findings in that area has to be handled very carefully, and should come from the skeptical community rather than the pro-paranormal side. My own investigative concern is with the observable, repeatable effect, not with statistical analyses of large numbers of tries.

Unfortunately, there are matters of secrecy involved with this subject matter. Not many people are aware that all patent applications in the United States are screened for national security-related information by top-level examiners, and are subject to review by the Armed Services Patent Advisory Board (ASPAB) and appropriate intelligence agencies which, if warrented, may issue a secrecy order to the patent applicant to prevent publication or discussion of vital information (Invention Secrecy Act).

It is clear that first-time, scientifically demonstrable PK, possibly coupled with an invented detection device, would have both government and corporate national security implications, not just in this country, but worldwide. It would usher in a new multi-billion dollar field of science. My knowledge of this subject is not something I can go into more detail about at this time, as it falls under the category of proprietary information. (An analogy would be the reason why the Coca Cola company keeps its ingredients lists a secret.)

[Editor's note: There have been no experiments confirming the existence of PK to the satisfaction of expert observers such as James Randi or his fellow skeptical conjurers. TBS would award its "1,000 Challenge" prize (and Randi his $10,000)* for a successful demonstration of PK under properly controlled conditions.]

This article, which first appeared as the cover article in the Fall 1993 issue of Tampa Bay Skeptics Report, has been reprinted in the March 1994 issue of Indian Skeptic and referenced in the September 1994 issue of Taiwan Skeptics.