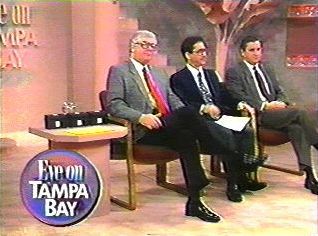 The Tampa Bay Skeptics took its "$1,000 Challenge" (along with three mystery boxes, a secret envelope, and a blank check) to the area's most popular TV talk show, Eye on Tampa Bay,  [later renamed the Kathy Fountain Show and still later Your Turn] on January 28, 1993. A correct determination of the contents of any of the four containers would have yielded an instant $1,000 for any of the "psychic" viewers in the studio or the live television audience. But, as we expected, no one walked away with the prize.

Chairman Terry Smiljanich, myself, and vice-chairman Miles Hardy (from right to left in image on right; click it to play one-minute video) represented TBS on the panel. On a table alongside our chairs were the numbered boxes and envelope, with my very own "crystal ball" placed behind them to enhance the atmosphere. Interspersed among the questions about TBS from host Kathy Fountain and the audience were the alleged "psychic" prognostications (and admitted "guesses") from studio and home viewers eager to show just how wrong TBS is about the existence of ESP and other paranormal phenomena.

In complete secrecy before arriving at the studio, I had placed an object in box #1 (a coin containing silver that had been to the moon) and in the envelope (the original artwork of a Don Addis "Psychic Hotline" cartoon from the St. Petersburg Times). Smiljanich had done the same for box #2 (a figurine of a tortoise hatching out of its egg), and Hardy for box #3 (a doll used in the Stanford-Binet Intelligence Test). Not even we knew what was in each others' box/envelope until they were all opened at the very end of the show.

Fountain announced during the program that "We invited dozens, hundreds [of psychics] and said come in the audience," but only two or so seemed to have accepted the invitation. One offered an explanation for why her fellow practitioners might have hesitated to participate in such a forum: "The psychic ability is a gift . . . that sometimes is misused by way of showmanship . . ." This "psychic" had earlier, with our permission, been allowed to touch the boxes and envelope in order to pick up the vibrations of the objects contained therein. She ventured a guess as to the contents of the envelope: "A certificate . . . to join the Tampa Bay Skeptics." Nice try.

The other "psychic" audience member, wearing a pyramid on her head, was Sue Wallace, identified as a "bio-magnetic research scientist" in the program guide from the Discovery Expo held at the Tampa Convention Center in September 1992. Wallace made two incorrect guesses, but her forte, she claimed, is the ability to "scan people's bodies and know what's wrong with them. I can scan anyone."

Only after the show aired was I reminded by Gloria Singleton, a TBS member and patient of mine (though not the author of our Summer '92 lead story) who had attended the Discovery Expo "for fun," that it was Wallace who had diagnosed her there as having "lung cancer." Singleton tells me that one of her two girlfriends who witnessed the incident had "turned white in total shock." Fortunately, and predictably, that "diagnosis" proved to be as off-base as were Wallace's on-air guesses.

During the show, Fountain had asked Smiljanich about the seemingly innocuous, "fun" nature of paranormal activities. Although Terry pointed out quite nicely how such is not always the case, I wish I could have used the above example to even more vividly illustrate for the vast viewing audience just how destructive, and downright cruel, this kind of "fun" activity can really be.

This article appeared in the Spring 1993 Tampa Bay Skeptics Report.